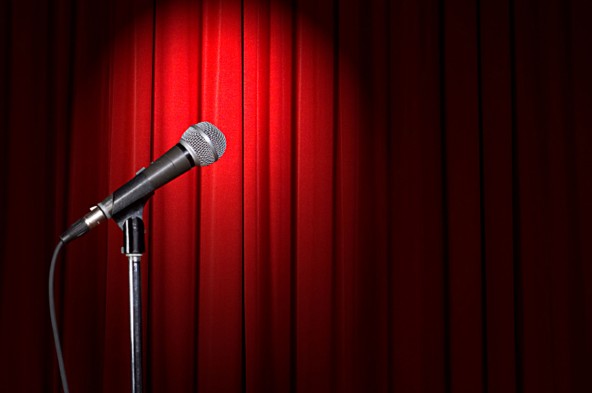 It was about three years ago when Julia Sutherland asked if I would introduce her on stage at Grape on George Street in Edinburgh. It was her first Fringe show and she needed a compere. I stupidly thought, how hard can it be? Get up there, talk for five minutes then bring her on. What I wasn’t expecting was two of my comedy heroes to be sat in the front row. Fred MacAulay and Sean Hughes – both there to witness my stand up debut.

I got up, told a few anecdotes, noticed Fred wiping sweat off his head and Sean Hughes staring blankly at the walls – but some of my friends were there and they laughed – so everything seemed fine. I got off stage and was convinced I’d been amazing! It’s that sort of confidence mixed with total ignorance that you need to progress in the stand up game. Progress, not succeed.

My next gig was a few months later at The Stand in Edinburgh at Red Raw – I opened with the line…. “Hi, my name’s Richard Melvin, I come from Scotland but I have a posh English accent – it’s weird, I think in a Scottish accent – but I sound like a dick.” Nobody laughed… and then one person in the front row leant forward and whispered…. “That’s because you are a dick.” I felt like I’d been punched in the stomach. I was actually winded; my breath had literally been taken away. It was awful. Someone said to me afterwards “if you die at Red Raw, then you must be shit.”

I took that as a challenge. So, from then on I tried hard, wrote jokes, honed stories, discovered that where my shoulders were, or how I placed an eyebrow can impact on the audiences reaction. I discovered that sometimes it CAN be a bad crowd and not a just a bad act. In the process, I discovered a lot about myself and in August 2012 I was invited to perform in front of 1,200 people at The Edinburgh International Conference Centre with some of my comedy heroes on the same bill instead of in the front row. It was amazing and I’m pleased to say I held my own. I didn’t storm it, smash it, blow the roof off or anything like that but I held my own. And that night, three years after I started, I learnt an important lesson. Stand up comedy isn’t for me.

I like watching it, writing it, making radio shows and podcasts about it and I look forward to working with the best in the business. The best in the business are amazing, they’re artists, modern day philosophers, key opinion leaders; they have the ability to make you laugh, really laugh.

The trouble is, those comedians are very few and far between and after three years performing comedy I found that there’s a lot of really terrible acts out there… people full of confidence and ignorance and I’m not going to be that person anymore. Holding your own isn’t good enough for me. Unfortunately I wish 90% of the comedians I’ve seen thought the same. The world would be a better place.