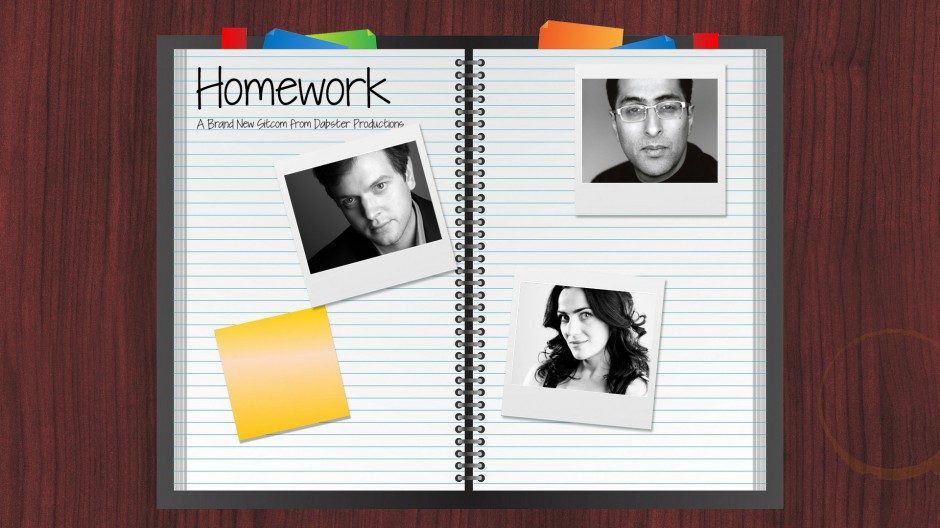 Sitcoms – the defining shared televisual experiences of our youth and the fabric of our very lives!!

Fawlty Towers, Blackadder, Father Ted, I’m Alan Partridge, The Vicar of Dibley, Red Dwarf, Absolutely Fabulous, Friends, Frasier, Seinfeld… Just some of my favourite TV shows EVER and all of them sitcoms.

I’m guessing you’ll have watched every episode of at least one of those too!

So to say I was excited to get a chance to work on writing and performing in a new sitcom would be a massive understatement. Like saying a date with George Clooney would be ‘alright’.

Based on the stand-up of Richard Melvin – which in turn was based on his own real life, as a father of two, trying to run a business from home with his best mates, having been a pharmaceutical sales rep in a previous life.

If you know Richard, you’ll know how naturally funny he is on a daily basis, and how fond he is of acting the fool, for the benefit of a good comedy anecdote.  Turns out that’s actually quite useful, when you’re writing a sitcom!

The learning curve we embarked on writing this pilot for BBC Radio Scotland was incredibly steep, but exhilarating. Thankfully we had the hugely talented, and stupidly funny Sanjeev Kohli on hand to help us turn the ideas into the reality of a script… something he has plenty of experience of, having written & starred in 5 whole series of ‘Fags, Mags and Bags’ for BBC Radio 4. We caught him just before he was swept away to revive his hugely popular role as Navid in Still Game, for their unprecedented 21-night run at the Hydro – in front of 12,000 people each time! (I think there are a just a few tickets left – so you should try and make it along if you can!).  Working with him and Richard on the script was just too much fun… I snorted coffee out of my nose on more than one occasion.  Hubba hubba!

We also had a blast down in London, recording with Miles Jupp – a man who can make even just breathing sound funny! You’ll have heard him on The News Quiz, his self penned ‘In And Out of The Kitchen’ (which just made the leap to TV) and lots more on Radio 4, as well as seen him being hilarious and brilliant in Rev and The Thick of It to name just a couple of his TV credits.  He is currently rehearsing for ‘Neville’s Island’ at The Duke Of York’s Theatre in London, and you can see him performing alongside Adrian Edmondson, Neil Morrissey and Robert Webb from the 10th October.

(PLUS Miles was in Hollywood movie Monument’s Men – so that means I now have 1 degree of separation from Swooney Clooney! Result!)

Please have a listen of our pilot on BBC Radio Scotland, on Monday 29th September at 13.32… I really hope you like it – working on it was a dream come true!